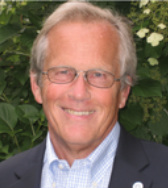 John C. Read was elected CEO and director of this collective impact initiative in May, 2014. His return to Charleston, SC followed service as chief executive for SeriousFun Children’s Network, Paul Newman’s global network of camps and programs serving children with life threatening illnesses. John joined the Network after serving as chief executive for Outward Bound USA from 2001 to 2010.

John entered the non-profit sector after serving as President and CEO for Heavy Duty Holdings (HDH), a $400 million mobile equipment components company he founded [Now Commercial Vehicles Group, Inc. (CVGI-NASDAQ)]. He began his career in government service, holding positions at the federal and state level, culminating in his appointment by President Ford and confirmation by the U.S. Senate as Assistant Secretary for Employment Standards in the Labor Department. Prior to HDH, John served in senior manufacturing roles with Cummins Engine and the Donaldson Company.

John holds a BA and MBA from Harvard University, and Honorary Doctorate degrees from Centenary College and Shenandoah University. In an issue titled, “The Giving Back Awards,” John was honored by Newsweek Magazine as one of fifteen individuals that “make America great.”

John is married to Alexandra Read.  They have three children and five grandchildren.
Powered by